This year’s Award for Best Creative Re-use of an Industrial Building has been given to the Railway Carriage Works, Inverurie, incorporating housing, offices and the Garioch Heritage Centre. 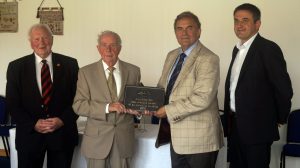 The Heritage Centre southern end of the complex.

Inverurie Locomotive Works was created in 1902 when the Great North of Scotland Railway moved their works from Aberdeen having sought advice from Dean the then superintendent engineer of the Great Western Railway whose main Works were at Swindon. Work commenced in 1898, the first block being ready for occupation by the Carriage & Wagon Dept some three years later. Carriage construction generally had evolved from spartan four and six-wheelers to comfortable corridor bogie stock by the tum of the century; by 1903 the GNSR could provide its own Royal Train.

By the early 1960s some 550 people were employed at Inverurie, the average weekly output being two locomotives with General or Intermediate repairs and one with Casual repairs while 25 carriages and 125 wagons being attended to. Although Inverurie survived the re-organisations of 1962 and almost half the town’s population was employed at the Works they did not survive BR reorganisation in 1969 with the Works gates closing for the last time at the end of December 1969.

Housing and offices from the north

The large erecting Shops were demolished several years ago but the former Carriage Building, with its 20 ton overhead crane, precariously survived in various storage uses and through a series of damaging fires. 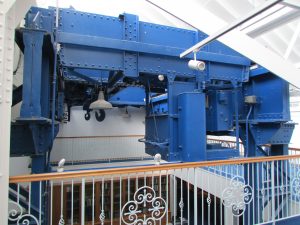 It was finally rescued by the firm Malcolm Allan Housebuilders and most of the complex was converted into 40 residential units and offices. Meanwhile, the Garioch Heritage Society had been searching for many to find a permanent home for its collections and archives and Mr Allan offered one end of the building to house the Heritage Centre. 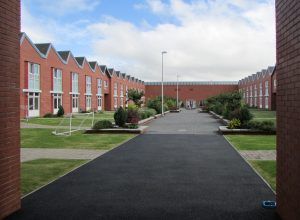 A franchised cafe opened serving the Heritage Centre in the foyer last summer and the Garioch Heritage Centre itself opened in October 2017. At the opening ceremony Mr Allan said: “It has taken a long time to get here – six years ago, I decided to renovate the building as I wanted people to be able to look back on the days of steam trains. “This area used to house a lot of skilled tradesmen and it is rich in history – I thought if I can afford to, then I should do it.”

The Heritage Centre does that and a lot more! In addition to marvellous model of the Railway Works in operation and fine displays relating to life in this region of Aberdeenshire there is an important gallery on Tait’s Paper Mill at Port Elphinstone – the other major employer in the town. 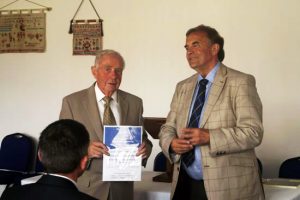 Malcolm Allan of Malcolm Allan Housebuilders was also presented with a certificate from the AIA and Keith Falconer stressed that the criteria for this AIA Award recognised sustainable creative reuse and this mixed use development ticked all the boxes. 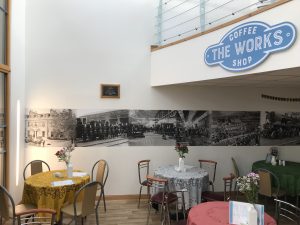 The plaque itself has now been mounted on a backing board and proudly displayed in The Works Coffee Shop. Malcolm Allan Housebuilders joiners made the backing board by laminating some pitch pine timbers which were salvaged from the loco works carriages building during conversion.

There was good coverage of the award presentation in the local press including the Inverurie Herald and on social media some of which can be seen on the web links below.

Click on any image to see a full size version