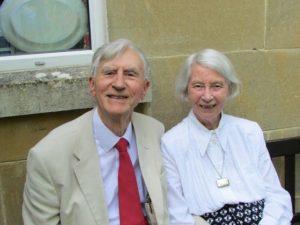 Angus & Brenda Buchanan on the occasion of their Diamond Wedding Anniversary

It was with great sadness that the AIA Council recently learnt of the deaths of two of the seminal figures in industrial archaeology. Brenda passed away on 14 April and Angus on 17 June. For many of us Angus’s Book Industrial Archaeology in Britain, published by Penguin Books as a Pelican Original in paperback in 1972, summed up the development of the subject into a national movement. The Buchanans’ involvement in the subject locally, nationally and internationally, of course, went back many years earlier.

They met in their native Sheffield when they were sixth form students, married in 1955 and Angus, who had completed his PhD in trade union history at Cambridge, took up the post of Adult Education Officer with the Royal Foundation of St Katherine in Stepney in 1956. It was then that Angus first became involved in the Workers Educational Association (WEA) which was to be a significant feature of their next decade.

In 1960 Angus and Brenda left Stepney for Angus to take up the post of Assistant Lecturer in Social & Economic History at the Bristol College of Science & Technology which was being recognised as a CAT – a College of Advanced Technology. At the Bristol Folk House Angus resumed his WEA work and it was at that group that their association with Neil Cossons, the new Curator of Technology at Bristol Museum began and together, with like-minded members of the group, they formed the Bristol Industrial Archaeology Society. Angus and Brenda also pursued their social work interests through The New Bristol Group set up by Tony Benn.

Brenda wrote an informative and evocative account of the early days of BIAS in her contribution to the 50th anniversary issue of BIAS Journal that was published in 2017. These were heady days when there was much to be discovered and enjoyed on site visits by our founding members –or ‘Founding Families’ – as Brenda reminded us in her article, as many children were also present. Brenda always found time to support Angus during his years as the first BIAS President and to encourage and support members in their research.

In 1966 the Bristol CAT became the University of Bath and the history of engineering element moved to Claverton Down where Angus with his ‘research assistant’ George Watkins (of steam engine fame) had a room in the Library. Angus then ran a series of Bath Conferences on Industrial Archaeology which soon had an international following and he and Brenda were to forge friendships around the world. He was very involved with the CBA Research Committee on Industrial Archaeology in the 1960s and when he created a Centre for the Study of the History of Technology to attract post-graduate work on the subject, the National Record of Industrial Monuments was established there in 1965, based on the CBA Survey record cards. In 1971 the Centre, with this resource, was to host the newly created post of CBA Survey Officer for Industrial Monuments.

It was also in 1971 that Angus was involved in the first British Industrial Archaeology Conference which was held in Bradford and in a second such conference held in Strathclyde. This led, in 1973, to the formation of the Association for Industrial Archaeology at a third conference held on the Isle of Man. Angus was to succeed Tom Rolt as President of the AIA the following year upon the death of Tom, our first President. Angus was also involved in the early years of the formation of the international organisation that is now TICCIH (The International Committee for the Conservation of the Industrial Heritage). In 1973 he attended the First International Congress of the Conservation of Industrial Monuments, which was organised by Neil Cossons, and attended by some of the key international delegates that had come to the Bath conferences years earlier. On the third such conference , in Sweden in 1978, the word ‘heritage’ was substituted for ‘monuments’ and TICCIH was born.

When in 2001 the AIA Council decided to have a Chairman instead of President, Angus was appointed the Association’s first Honorary President a post he held for some 9 years. Angus was also very much involved for many years with the National Trust’s Industrial Archaeology Panel and made many assessment visits to historic industrial places in which the National Trust were interested.

Meanwhile, Brenda’s research into Turnpike Trusts and their capital formation had led to her PhD in 1992. This was followed by a detailed study of the shareholders behind the construction of the Avon Navigation before she turned her attention to the manufacture of gunpowder and its ramifications. This work, originally locally focussed, was to become, via the International Committee for the History of Technology (ICOHTEC), the subject for which she became internationally known. It was Brenda’s interest in gunpowder that led Neil Cossons, the then Director of the Science Museum in London, to propose her as a trustee of the Waltham Abbey gunpowder mills project in which she became very active, especially in ensuring that proper conservation standards were maintained.

In later years both Angus and Brenda focussed more on their ICOHTEC involvement, as Angus had been a founder member in 1968 and then later President of the organisation, but their personal interest and in particular in the activities of their AIA friends never waned. This is not intended to be a formal obituary but rather a personal celebration of the quiet impact and unobtrusive inspiration that the Angus and Brenda team –and it was always an equal team – made on the subject of industrial archaeology and indeed on our industrial heritage.